Delos is a Greek island in the Cyclades archipelago which was both an influential political force and, with its sanctuary to the god Apollo, an important religious centre in the Archaic and Classical periods. The island was also a major commercial and trading centre in the 2nd and 1st centuries CE. 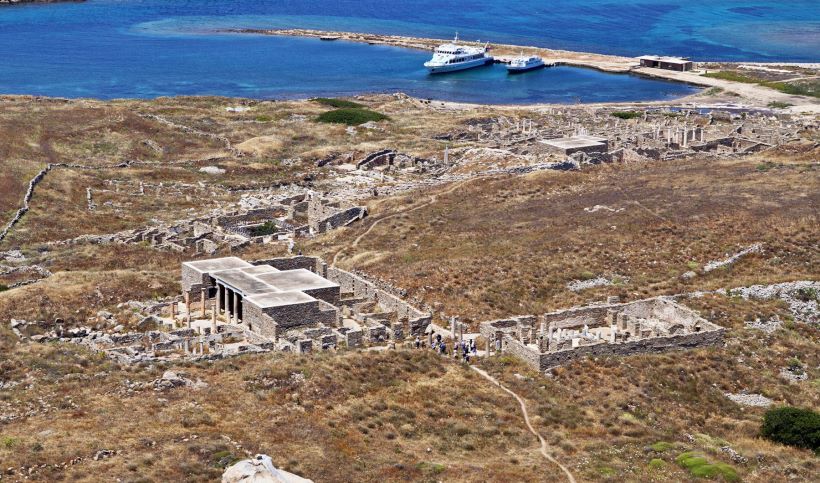 Delos, measuring a mere 3 km², is a small island without any particular advantages for habitation due to its barrenness and lack of water. In Greek mythology, this is precisely why Leto, escaping the wrath of Hera, was able to find sanctuary here in order to give birth to Apollo and Artemis. In some versions of the myth, Zeus (Leto’s lover) called on his brother Poseidon to create the island with a thrust of his trident, hence the name Delos, which signifies ‘appearance’ or ‘apparent’ in ancient Greek. The ancient Greeks also considered the island the centre of the Cycladic group and as the last resting place of the Hyperboreans – a legendary northern race of Apollo-worshippers.

THE ANCIENT GREEKS CONSIDERED THE ISLAND THE BIRTHPLACE OF APOLLO AND THE CENTRE OF THE CYCLADES ISLANDS. 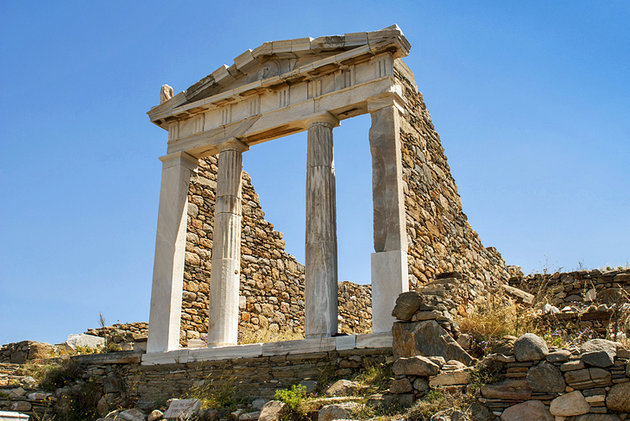 The island was first inhabited in the early Bronze Age, and Mycenaean tombs have been excavated dating from the late Bronze Age. Colonised from Ionia in the mid-10th century BCE, it was not, however, until the 8th century BCE that the site began to take on a religious significance in the wider Greek world. Athens, under Pisistratus, took a greater interest in the island in the 6th century BCE and attempted to purify the island by a ‘catharsis’ – removing and prohibiting burials on the island from c. 540 BCE.

Delos further increased its importance when it was chosen as the meeting place and treasury for the Delian League in 478 BCE. In 454 BCE the treasury was moved to Athens and the Athenians also took over administration of the site. Administration changed hands when Antigonus established the League of Islanders in 314 BCE, which included Delos.

Following the Chremonidean War (266-229 BCE), Delos became an independent polis for the next 150 years or so and was administered by a religious council of hieropoioi. In this period, the island enjoyed the generous patronage of various Hellenistic kings. The island’s independence came to an end in 166 BCE when the Romans gave control of Delos back to Athens, also making it a free trade port. This brought another period of prosperity, and the island became an important centre for the slave trade whilst its population greatly increased in size and ethnic diversity, a fact reflected in the adoption of diverse religious cults on the island, such as those to Sarapis and Isis. Things took a turn for the worse, however, when the island was sacked first by Mithradates VI’s general, Archelaus, in 88 BCE and then again by pirates in 69 BCE, events which brought about the island’s gradual and permanent decline.

THE SANCTUARY OF DELOS

The island was first excavated by a team of French archaeologists from 1873 CE, revealing the true extent of the religious site. The island once had temples dedicated to Apollo (the Artemission), Leto (the Letoon), Artemis, Hera (the Heraion), Zeus, Athena, Hercules, and Asclepius. The Temple of Apollo housed, from the 6th century BCE, an 8 m high cult statue of the god made of wood and covered in gold. There was also a temple dedicated to the twelve Olympian gods (the Dodekatheon). Several other sacred buildings have also been identified but their exact purpose is unclear.
The Panēgyris, an Ionian festival in honour of Apollo, was held every year on the island and in the late 5th century BCE, a spectacular (Athenian inspired) festival – the Delia – was held every five years. The accompanying athletic games and musical and dancing contests attracted visitors from across the Aegean. Victors in the Delian games climbed the island’s Mt. Kynthos in order to be crowned.
As with other major sanctuaries, Delos had a diverse complex of buildings, including a monumental gateway entrance (propylaea) to the site, a theatre (c. 300 BCE, capacity: 5,000 spectators), stadium, several stoas (for example, of Antigonus), gymnasium, hippodrome, palaestras (3rd and 2nd centuries BCE), a hippostyle hall (constructed in the 3rd century BCE) an agora (built under Theophrastus in the 2nd century BCE), and even a sacred lake, guarded by marble lions.

Two columns topped by a phallus, each carrying relief scenes of Dionysos and Pan, c. 300 BCE. The phallus was a typical symbol of the cult of Dionysos. They stand as part of the Stoivadeion, a rectangular exedra.

Beyond the sanctuary of Apollo, there were also sanctuaries testimony to the city’s one-time cosmopolitan make-up, with temples to Isis, Serapis and Cabeiri. Commercial buildings on the island included markets and warehouses, and the residential area dating from the 2nd century BCE displays grid street plans and large houses, which, with their mosaics, wall paintings, and colonnades, are testimony to the islands one-time prosperity.

Notable archaeological finds at the site are the famous marble lions, much weather-worn but still retaining a regal air. Of these, five lions survive from the original nine dedicated by the Naxians in the 7th century BCE. In addition, several fine mosaics have been uncovered, including one depicting Dionysos seated on a panther.