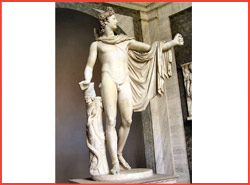 The epitome of youth and beauty, source of life and healing, patron of the civilized arts, and as bright and powerful as the sun itself, Phoebus Apollo was, arguably, the most loved of all the Greek gods.

Son of Zeus and Leto, and twin brother to Artemis, Apollo was born on the island of Delos (in Hesiod’s account clutching a golden sword). At his first taste of ambrosia he was said to have immediately transformed from babe to man. Sanctuaries were built in his honour throughout the Greek world, notably at Delos and Rhodes. Indeed, in antiquity, the Colossus of Rhodes, one of the Seven Wonders of the World, was a huge representation of Apollo. As with the other major divinities, Apollo had many children; perhaps the most famous are Orpheus, Ion, and Asclepius (to whom he gave his knowledge of healing and medicine).

Objects traditionally associated with the god include: a silver bow (symbolic of his prowess as an archer), a Kithara or a lyre made from the shell of a tortoise (a gift from Hermes after a quarrel over his theft of Apollo’s cattle, symbolic of his ability in music and leader of the chorus of the nine Muses), a laurel branch (symbolic of the fate of Daphne who, after the god’s amorous pursuit of her, led her father, the river god Phineus, to transform her into a laurel tree), the omphalos (symbol of Delphi’s position as the navel of the world), and a palm tree (which Leto gripped when she gave birth to her son).

APOLLO REPRESENTED MANY POSITIVE ASPECTS OF THE HUMAN CONDITION SUCH AS MUSIC, POETRY, AND MEDICINE.

Although he was associated with many positive aspects of the human condition such as music, poetry, and medicine, the god also had his darker side as the bringer of plague and divine retribution, most famously as the remorseless slayer of Niobe’s six (or in some accounts seven) sons as punishment for her boasting and as the flayer of Marsyas after his presumptuous claim to be more musically gifted than Apollo himself.

IN THE TROJAN WAR 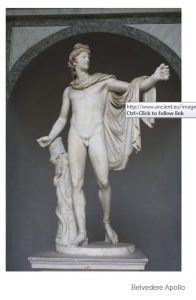 Apollo is a significant protagonist in Homer’s account of the Trojan War in the Iliad. On the side of the Trojans, he gives particular assistance to the Trojan heroes Hektor, Aeneas, and Glaukos, saving their lives on more than one occasion with his divine intervention. He brought plague to the Achaeans, led the entire Trojan army (holding Zeus’ fearsome aegis) in an attack which destroyed the Achaean defensive walls, and was also responsible for guiding Paris’ arrow to the heel of Achilles, killing the seemingly invincible Achaean hero. Apollo is most frequently described by Homer and Hesiod as the ‘far-shooter’, the ‘far-worker’, the ‘rouser of armies’, and ‘Phoebus Apollo’.

Apollo’s most direct presence amongst the Greeks was manifested in his oracle at Delphi, the most important in the Greek world. Apollo, wishing to reveal to man the intentions of his father Zeus, created the oracle on the site where he killed the serpent (or dragon) Python. The Panhellenic Pythian games were begun at the site in order to commemorate the death of this divine creature. Tripods and laurel wreaths were given as prizes to the victors at the games.

Apollo appears frequently in all media of ancient Greek art, most often as a beautiful, beardless youth. He is easily identified with either a Kithara or a lyre, a bronze tripod (signifying his oracle at Delphi), a deer (which he often fights over with Herakles), and a bow and quiver. He is also, on occasion, portrayed riding a chariot pulled by lions or swans. Perhaps the most celebrated representation of Apollo in ancient Greek art is the statue which dominated the centre of the west pediment of the Temple of Zeus at Olympia (ca. 460 BCE). Here, in majestic pose, he brings order and reason to the battle between the Lapiths and the Centaurs at the wedding of Peirithoos. 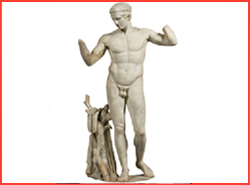 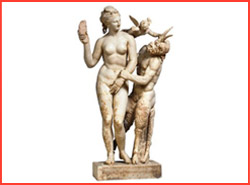 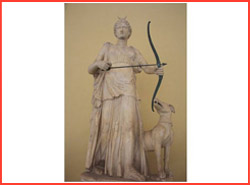 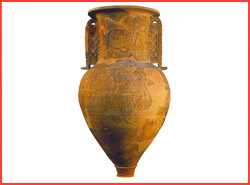