Visiting the Archaeological Museum of Piraeus

Visiting the Archaeological Museum of Piraeus

If you’re staying in Athens then you will almost certainly visit the world famous National Museum and so have your breath pleasurably taken from you as you marvel at the treasures of Greece‘s glorious past. As this stupendous collection seems to have been pillaged from every local museum across Greece you might be forgiven for thinking that those other museums must have nothing more to present than empty shelves and little cards indicating, with some apology, that said artefact has been moved to Athens. Astonishingly though, even more wonders await the more intrepid traveller, in this case just down the road in nearby Piraeus. 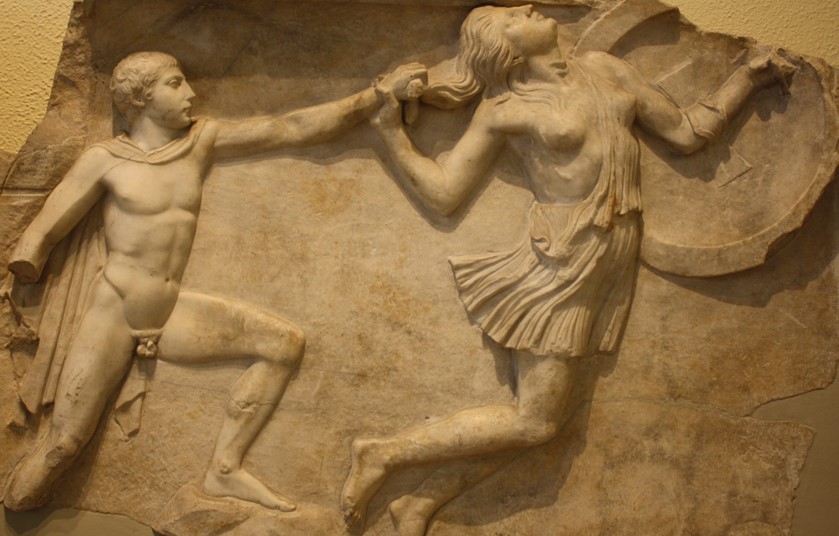 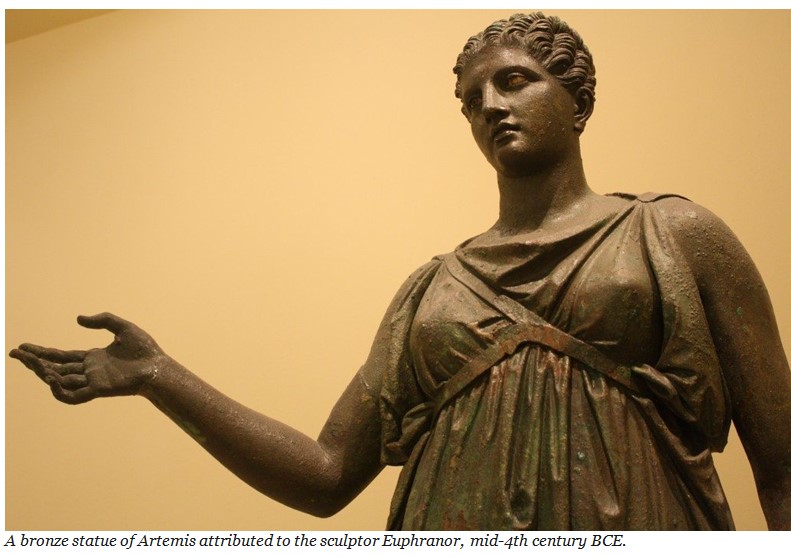 For those willing to visit the Piraeus, Athens’ bustling and rather unappealing port some 12 km from the city proper, a few archaeological wonders await. The Piraeus Archaeological Museum seems to have somehow resisted the grasping tentacles of the National Museum and, hiding down a quiet street in a non-descript suburb, it is the home to some of the finest ancient bronzes anywhere.

Piraeus was the ancient port of Athens throughout the Archaic, Classical and Hellenistic periods and in fact consisted of three separate harbours – Kantharos, Zea, and Munichia. The first was the largest and used for commercial activity, whilst part of Kantharos and the other two smaller harbours were reserved for military use to house the massive Athenian fleet which allowed the city to be one of the most powerful players in Greece and the wider Mediterranean throughout antiquity.

The Piraeus can be reached from central Athens by metro or bus. It is still both a working port and marina and it has that busy, shabby, slightly edgy atmosphere common to most ports of the world. Apart from the picturesque crescents of its two smallest harbours and the views of the deep blue Aegean sea there is not much to attract the international visitor during the day. At night the place does spark into life, especially along the curve of fish restaurants and bars which pull in Athenian sea-food lovers. There isn’t much to see by way of ancient ruins – just a few stretches of the ancient fortifications – and only the museum is of real interest to the casual history lover. But what a museum; a little gem made all the more appealing by its lack of visitors and one can’t help feeling slightly smug at having bothered to make the effort to find the place.

The museum collection was first assembled in 1935 and then housed in the present two-storey building in 1966. The curators, having faith in the artefacts rather than any fancy pyrotechnics in their display, have arranged the objects in simple chronological order. However, be careful, as the start of this journey through time starts on the upper floor and then continues on the ground floor.
Naturally, most of the exhibits date to Athens’ heyday in the 4th and 5th centuries BCE but there are artefacts from Salamis and the coastal area. The entire collection covers the Minoan to Roman periods. The first rooms upstairs have, frankly speaking, little you cannot see in other museums such as Greek pottery and votive statues but there are some highlights on the landing which illustrate Piraeus’ maritime connections. Three impressive artefacts are a bronze ram in the form of a trident, a marble eye, and a stone pyramid anchor all from a trireme, the famous Greek warship which had three levels of rowers. Another unusual exhibit is the marble table used to check measurements in the sale of liquids and, finally, the 4th century BCE wooden coffin in the entrance to the funerary room is worth a pause. 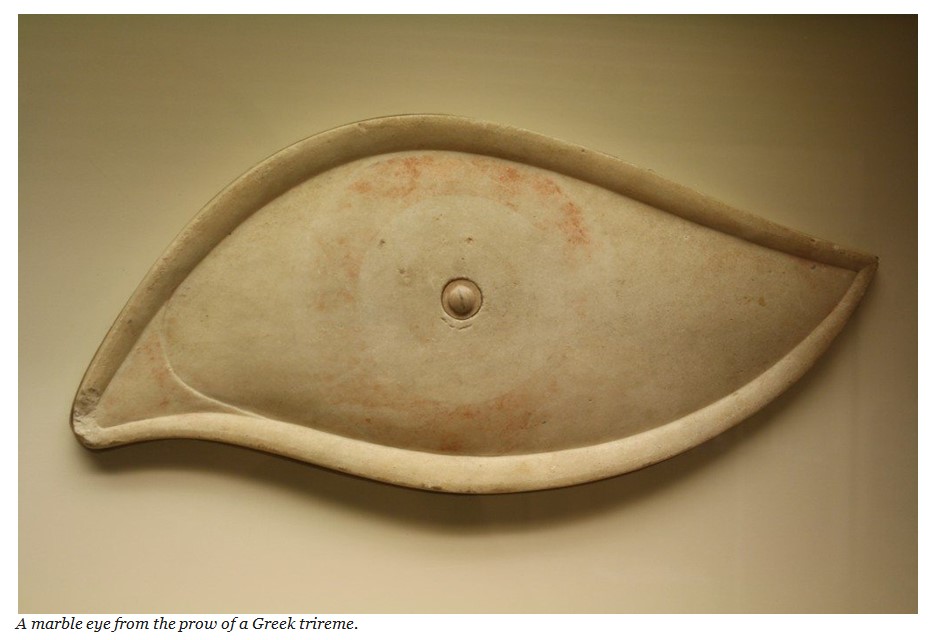 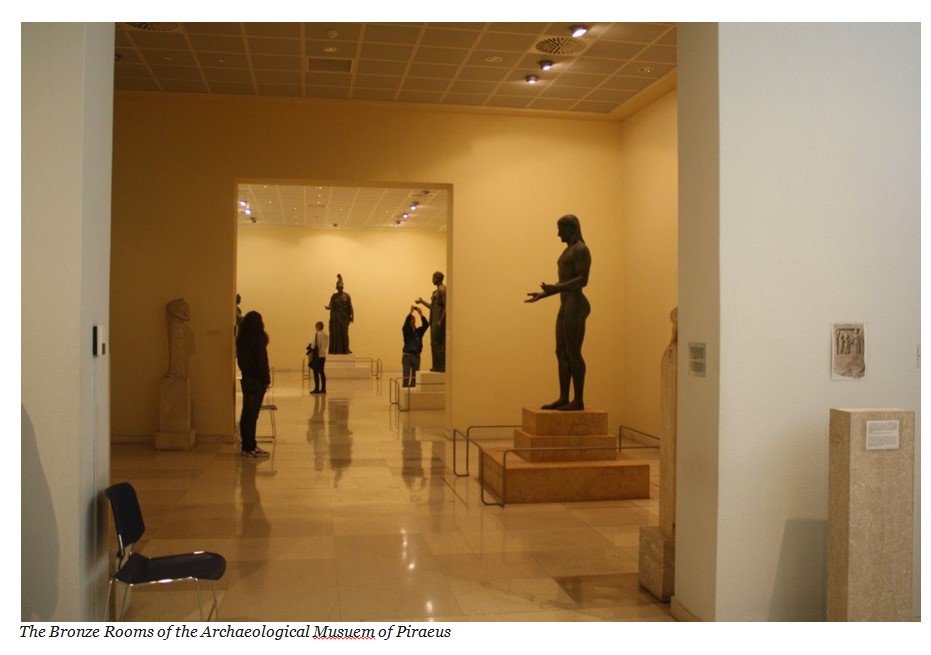 The star pieces of the museum come next and these are a stunning collection of four bronze statues with an added bonus of a large bronze mask inspired by Greek tragedy. These marvels were discovered during public works on the Piraeus sewers in 1959. They had probably been stored for temporary safe-keeping in 87 BCE during the siege by the Roman general Sulla and were buried in the cellar of a building which was then destroyed by fire. Considering that there are only 35 or so surviving full-figure bronze statues from any ancient civilization, to have four in one room is something of a luxury.
The earliest bronze statue is of a youthful Apollo which stands 1.95 m tall and dates to the 6th century BCE. Apart from its impressive poise it also has the distinction of being the only surviving example of a bronze kouros, the nude male figure so popular amongst early Greek sculptors. 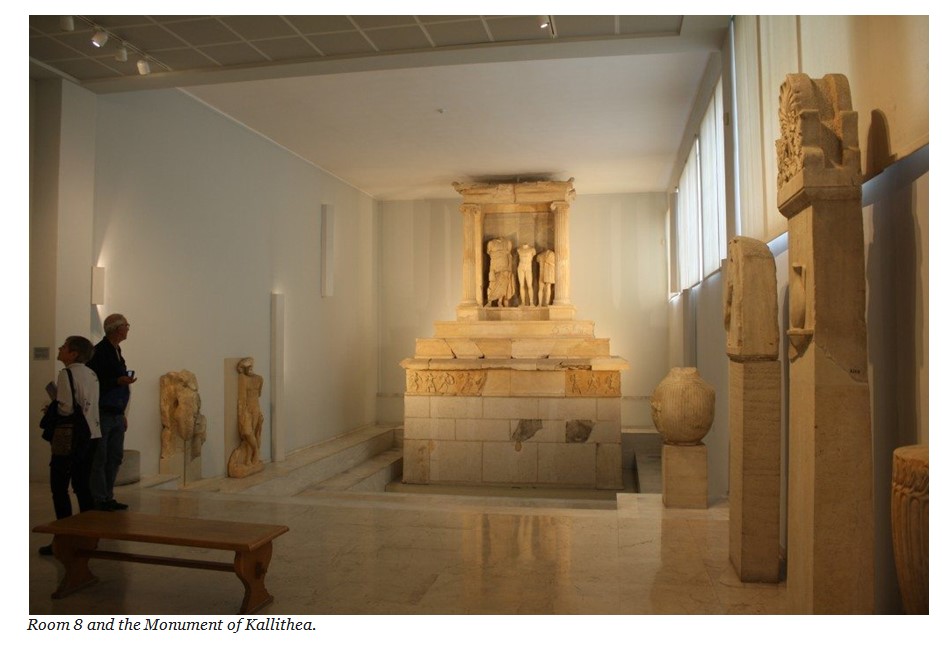 In the next room are the bronze statues of Athena and Artemis, along with the bronze theatre mask, each given plenty of breathing space with no other distractions and no glass to get between the visitor and 2,000 years of history. The two statues of Artemis and the Athena are from the 4th century BCE. The Athena Parthenos is the largest, standing at 2.35 metres, and her Corinthian helmet with extravagant crest only adds to the overall majesty of this striking sculpture.

The rest of the top floor is dedicated to votive relief plaques and grave stelai, some of them quite moving in their depiction of grieving relatives saying a fond farewell to their loved one.

Taking the staircase down to the ground floor it’s impossible to miss the huge lion sitting at the bottom which is a funerary monument from Moschato. The first rooms on this level continue the evolution of grave stelai which began upstairs in the 5th century BCE. With deeper and deeper carving and more and more extravagant sculptures the stelai reach into the late 4th century BCE. The most impressive sight here is perhaps the Monument of Kallithea which fills room 8.

A few bits and pieces of Hellenistic sculpture from the period when Piraeus was under Macedonian rule take the visitor to the Roman collection. This includes some handsome marble copies of earlier Greek sculpture and the ubiquitous busts of Roman emperors, notably an expressionless Hadrian and a stocky-looking Balbinus. Perhaps most striking are the Neo-Attic decorative slabs depicting Amazons. One slab in particular, has a male tugging back the hair of a female warrior in full escape mode. The sculpture looks like a very un-P.C. scene from a ballet. Another impressive slab has Hercules struggling with Apollo for possession of the Delphic tripod.
Outside, the small museum gardens contain the Hellenistic theatre of the Zea district and the usual bits and pieces of ancient architecture that always seem to dot any Greek museum’s outdoor space. These weather-worn chunks of columns and statue bases seem only to be awaiting the arrival of a skip to finally put them out of their misery. The gardens also have a number of sarcophagi with some interesting and well-preserved scenes from mythology so it’s always worth checking out all four sides.

After visiting the museum I had lunch nearby and, following a bit of confusion over the menu, got talking to a retired Canadian couple at the next table. We chatted about the marvels of the musuem and, with that North American habit of reeling off every place they had ever visited in their lives, I discovered they were continuing on their world tour by taking a cruise ship that afternoon. If they had made a point of stopping to visit the Archaeological Museum on their busy itenerary, then perhaps so should you. It will offer you an experience you won’t forget.

The Grave Monument of Kallithea 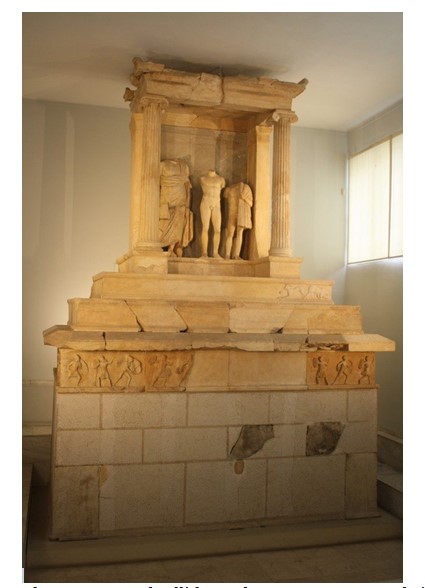 The Monument of Kallithea, a funerary monument of Nikeratos and his son Polyxenos, 4th century BCE.. 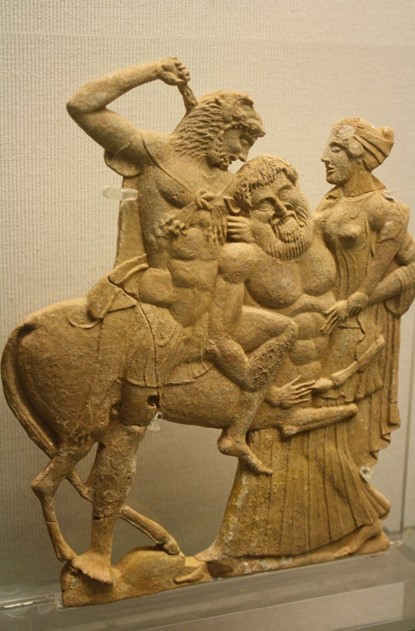 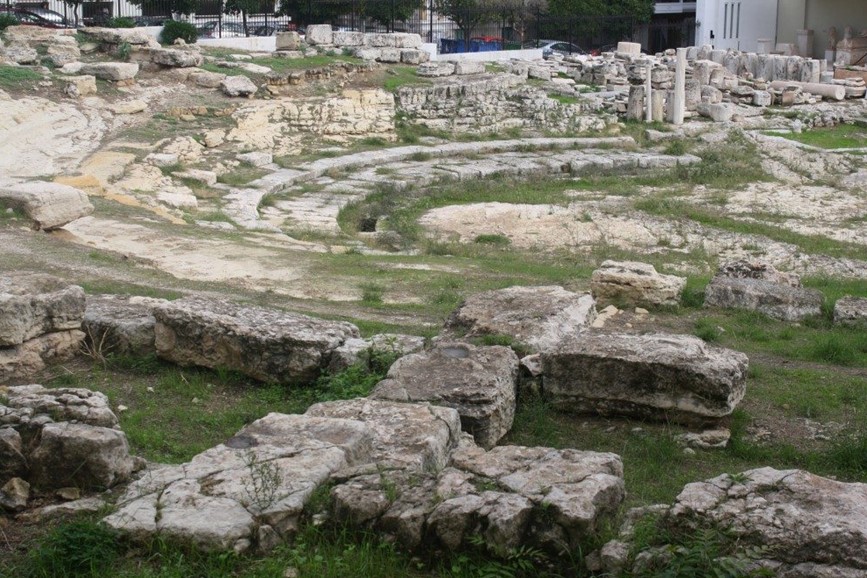 The Hellenistic theatre of Zea, Piraeus, located in the museum gardens.